July Armianov is one of the men in the business you can trust only after a few minutes of conversation. Calm, dignified, carrying the full expertise of his experience and skills, he admits that the decision to start his own business was difficult but right.

He speaks with the charm of the man who had the “chance” to live in two epochs – socialism and democracy for himself and his career.

“I have studied Heating, Ventilation and Air conditioning at the Technical University in Sofia more than 40 years ago. After I graduated, I was a designer and then a scientist. After that, I had to choose whether to pursue a scientific career or do my own business. It turned out that I made the right decision, because in the business I do, there are many opportunities for development and innovation” says July Armianov.

He created his own company “TANGRA” in 1989, almost immediately after the changes. But the history of this company is more than impressive. “My father had a company called TANGRA before World War II.” After 1944, the company was nationalized and ended, so in 1989 we decided to restore the old name of the company and specialized in the field of ventilation, air conditioning and heating equipment, product development, design and execution of projects. We have a large production factory and we are doing what we are good in for 28 years now, “says Mr. Armianov.

“Right now, besides being well-known on the Bulgarian market, we export products to more than 15 European countries, and you know that in Switzerland, for example, people are very keen on quality and efficiency, while in Greece people are looking for the good price. Our products are equally well sellable”, says Dipl. Eng. Armianov.

His tips for success in business

If we talk about business rules, July Armianov shares his thoughts and experiences in a few very simple tips. First of all, one must love his job. “This is extremely important and second, in my opinion, it is extremely vital to be able to create something new, because creating new products delivers a very special kind of pleasure. Although my place is rather administrative, when we create something and then we go to the laboratory and see it, I think Yes, here we designed it, we produced it and it works good. It’s an incredible feeling, “says Mr. Armianov.

Third, he places the honesty. “It’s a capital investment with a long payback period, but it’s worth it.”

Finally, he is convinced that if you love your work, you can create new things and have patience and perseverance – success will be with you.

July Armianov shares some funny stories from his work, which according to him, prove that we Bulgarians seem not to have shaken off the influence of the time before 10th November. “A long time ago, during a ventilation and air conditioning exhibition in Paris, I saw a product that we were alreay producing. It was a Belgian trader. He looked at me and said, “Sir, do you know what this is?” I told him: “I know, we have been producing it in Bulgaria for 10 years.” The merchant froze and asked, “Excuse me, but where is Bulgaria?”. Then he called his secretary to bring him a map to see where our country is. That was 20 years ago. And we still suffer from the lack of good image, “says Mr. Armianov.

“Most of the HVAC installations in the new hotels in Bansko ski resort are with our products. A young man who had a disco in Bansko came to us and he wanted air conditioning because it was very modern. Then I was friendly and I told him: “The people who bounce and dancing in the disco produce energy. Do you want this energy to put it in your pocket? “He first did not understand me, but he agreed and we built him an energy-saving ventilation system. We meet him in half a year, “Hey, do not know how smart I am, he tells me.”Because I listened to you – people dance, make energy, and I do not pay for ventilation. That’s great! “So there can always be funny cases,” says July Armianov.

The team of TANGRA company thanks to “Your Business” magazine for the wonderful interview.

Link to original article: Your Business 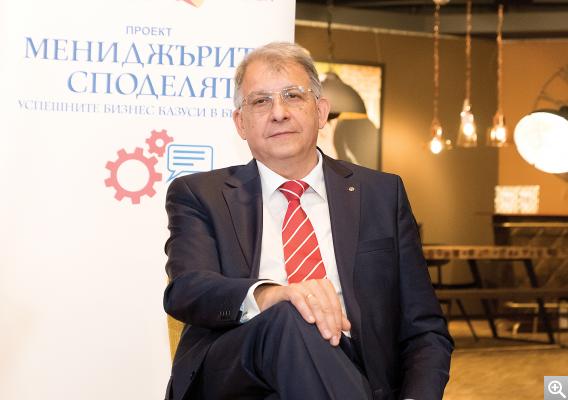 Media about us
« Previous article Next article »