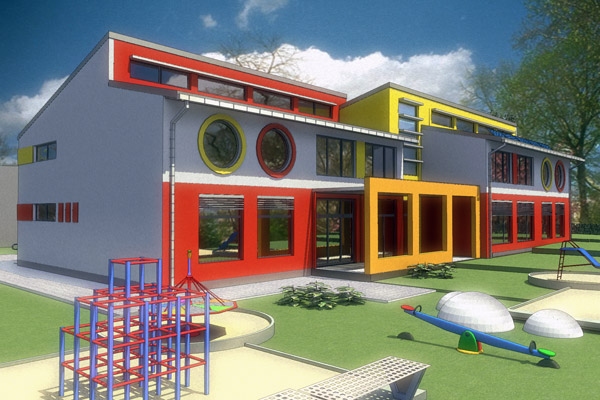 In 2013 in Gabrovo was build the first “nearly zero energy” kinder garden in Bulgaria.
According to the European directive 2010/31/EU on energy performance of buildings and the Energy efficiency Act Bulgarian municipalities have to increase the energy efficiency, to reduce the CO2 emissions, and also to raise the share of energy consumption produced from renewable sources. A renovation of the existing buildings and low energy consumption of the new ones are part of the prescriptions. In the town of Gabrovo those are not only words and intentions, but reality. The Municipality is one of leading in Bulgaria in implementation of energy efficiency measures. Seven schools, ten kinder gardens are just part of the municipality projects in the past five years, where  measures to increase energy efficiency are introduced. 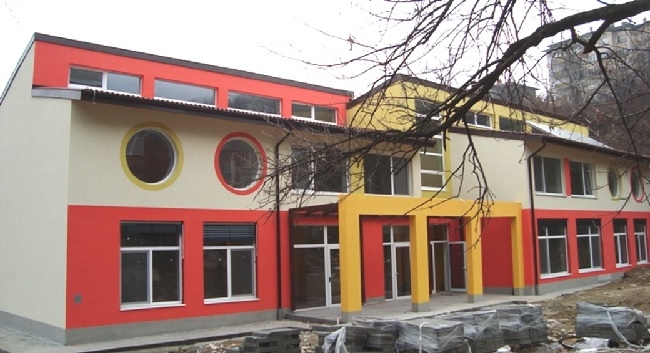 The construction of the new building was made according to the “Passive house” standard. The building was finished in 7 months. The project is made by “SolAir international” architectural studio in collaboration with EcoEnergy and EnEffect, which members were certified by “Passive House Institute – Germany” during the works.
The building passed the mandatory test for air tightness and now it is the first passive public house with a certificate from “Passive House Institute – Germany”.
The major concept of the building is to ensure all-season comfort of the children at minimum exploitation costs. The fresh air is provided by the ventilation system with integrated high efficient heat exchanger (recouperator) TANGRA EVB HiE. This type of controlled ventilation ensures a constant supply of fresh and clean air and prevent from energy losses which could appeared by natural ventilation. Studies show that the effect of this type of ventilation is the reduction of the sick-rate and the occurrence of allergies among the children. For that reason these systems are mandatory for schools and kinder gardens in many European countries.

Technical data
The building is designed as high efficient and with low energy consumption. The premises are placed in a way to achieve maximum heat gains. The heating is underfloor with working temperature of the water between 37°C and 32°C. High efficiency heat recovery ventilation (E=75÷85%) supplies the building with fresh filtered air. These types of systems transfer the heat of the discharged air to the fresh air, without mixing the both air streams. The required additional energy used for warming of the air until it reached the room temperature is minimized. The system TANGRA EVB HiE is produced by the Bulgarian company “TANGRA” and meets the requirements of the Passive House Institute – Germany. The main energy source of the building is heat pump air to water and as an additional source there is a central heating sub-station. Improved flat plate solar collectors ensure the domestic hot water of the building. All external and internal walls are built of bricks with external insulation (EPS 20cm). The roof is sloped and it is insulated with 30cm of mineral wool. The concrete construction of the floor is covered with 18cm XPS insulation, places under the slab, and 2cm XPS over the concrete slab. The glazing is triple, complying with the Passive House’ standards.

Looking forward: energy improvements step by step
The most positive is that this project won’t be the only one in Bulgaria. Projects for two more primary schools are in the initial stage of development, both pilot projects of the Energy efficiency center EnEffect called “Energy improvements step by step” which work had started recently. The center will advise the municipality of Gabrovo and will prepare the investment projects using the step by step method. This method provides optimal energy efficiency measures in stages, the saving of each will fund the next. This approach, of course, involves complex technical and financial planning and careful design and implementation, but is also able to overcome the main barrier for these improvements – the lack of initial capital. All those buildings are included in the project “Technical assistance” for preparation of Gabrovo municipality for the next programming period 2014-2020.